Hello Hawthorne Ward 3 Supporters and Friends. We are excited to unveil campaign endorsements for Craig! 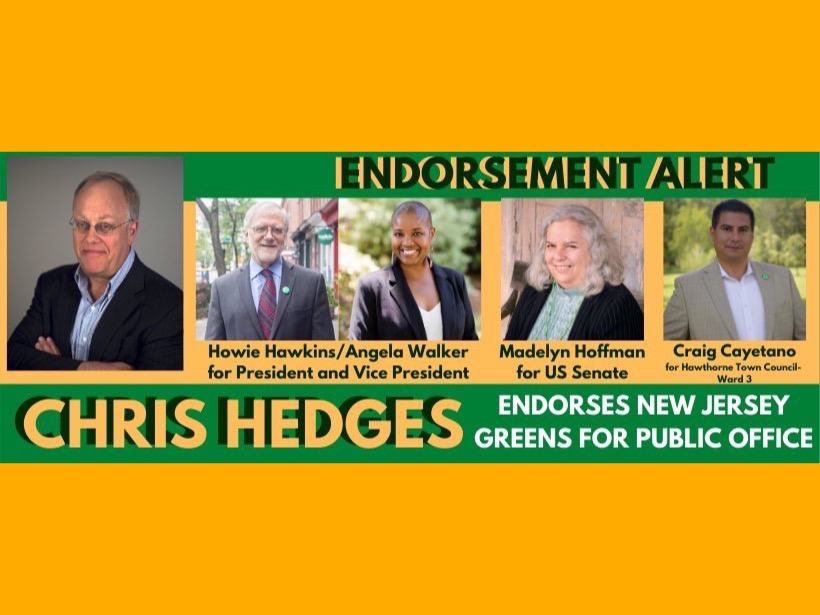 The Green Party of New Jersey is proud to announce that Pulitzer Prize-winning journalist, author, and activist Chris Hedges endorsed all GPNJ candidate campaigns for 2020. They are: Howie Hawkins and Angela Walker for President and Vice-President, Madelyn Hoffman for U.S. Senate, and Craig Cayetano for Council in Ward 3 in Hawthorne.

In his letter of endorsement, Chris Hedges writes, “I endorse the Green Party campaigns of candidates Howie Hawkins for President and Angela Walker for Vice President; the campaign of Madelyn Hoffman for U.S. Senate; and the special election campaign of Craig Cayetano for town council, Ward 3, in the town of Hawthorne. These candidates embody Green Party values. They know that the mainstream political parties have not, and will not, invest in people rather than corporations. They will never reform the systems of social control embodied in the police, the war industry, and prisons.”

He continued, “These candidates are facing important deadlines for filing petitions to place them on the November ballot. They need our help in obtaining the signatures to meet election requirements…We must step outside the system, to pit power against power, as tens of thousands of courageous men and women are doing in hundreds of American cities. This process of radical change will not be easy. It will not happen quickly or in one election cycle. It is a process, especially given the ecocide and corporate serfdom that confronts us, that we must embrace as a moral imperative. Voting is a small part of this process, but it sends an important signal to the ruling elites that their time is up, or soon to be up. We must stop fearing them. They must start fearing us.”

Madelyn Hoffman faces a July 6th deadline (technically July 7th at 4pm) for submitting signatures. Her petitions can be signed  on-line here: www.hoffmanforsenate.com/petition. Anyone eligible to vote in New Jersey who has not signed another petition for U.S. Senate may sign this petition.

Craig Cayetano faces the same deadline for submitting signatures. His signatures can be submitted on-line here: https://www.cayetano4council.com/candidate_petition  To sign for Cayetano, you must live in the third ward of Hawthorne.

Howie Hawkins and Angela Walker have until July 26th, 2020 (technically July 27th at 4:00pm) to submit their petitions. Anyone in New Jersey eligible to vote who has not signed anyone else’s petition for President, can sign these petitions. Please help these Green Party candidates get on the ballot in November so they can carry this fight to the voting booth.

The link for electronic signatures for the Hawkins for President campaign is: hawkins20.us/njpetition.

Continued Hedges, “Our enemy is the tiny cabal of corporate oligarchs who have seized control of the two ruling parties, the three branches of government, the media, academia, our health services, and the economy. They have usurped our rights to exclusively serve corporate profit. This is especially true in New Jersey, which has one of the most corrupt Democratic Party machines in the nation.”

He concludes, “Thank you for supporting the Green Party. The Green Party and its candidates stand unequivocally with those in the streets fighting institutionalized racism and those organizing strikes and work stoppages among frontline workers. The party seeks to express and honor the aspirations of those leading the current generational and class revolt shaking the foundations of New Jersey, the nation, and the world.”